With the sudden ending of the basketball season and the spring seasons, we have reached out to the coaches/parents to send in pictures of the 2020 Seniors who seasons got cut too short or all together. This week we are remembering the boys basketball program that was 22-1 and heading to their 2nd straight final 4 at the state tournament…………..

#1 Scott Lindblad- Scott was a key piece to the Pirates success this year. A year after not playing basketball in 2018-2019, Scott came back to help the team and add depth to our team. Scott was a good basketball player but even better person and teammate. Scott never once complained about minutes or a role, he went in and did his job for the team in every game and every practice. Players like Scott are unsung heroes in team success and we appreciate all his contributions to the team this year. Scott is also a baseball player for the Pirates. Scott has planned to go on and play baseball in college while studying to become a firefighter.
#3 Ty Shelley- Ty Shelley was one of the greatest outside shooting threats in the entire state this season. Ty set the school record for 3’s in a season and 3’s in a career. Ty has had numerous of post-season accolades that include- 2nd team all-frontier league, 2nd team all-state for Sports in Kansas, 3rd team all state for Topeka capital journal,810 varsity Honorable Mention All KC Metro, and Ty was named an alternate to the Kansas team for the GKCGBA all star game. Ty made his 3rd trip to the state tournament this year and was the leading scorer for the pirates in their final game. Ty Shelley will be remembered for his remarkable shooting and for being a winner at Piper High School. Ty plans to play basketball next year in college and is still deciding between schools. Ty holds offers from multiple junior college and NAIA schools in the area. 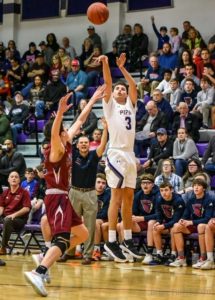 #24 Gabe Eskina- Gabe is the type of basketball player that everyone loves to watch play. Gabe plays hard, he’s intense, and he is all about the team. Before the season the coaching staff was trying to figure out starters and rotations for the upcoming year, as a new head coach I approached Gabe about coming off the bench because I felt that would be most beneficial for the team. Gabe was obviously disappointed wanting to be a starter but he responded with, “whatever helps the team coach.” It is that type of attitude and unselfishness that makes great teams. Piper was 22-1 and Gabe Ekina sacrifice lead to that success. Gabe was named honorable mention All-Frontier League being the only non-starter to attain all league honors. Gabe was named Sports in Kansas honorable mention All-State and was the first player in more than a decade to get all-state honors coming off the bench. Gabe leaves Piper as a key member of the winning-est class in Piper Basketball history. Gabe plans are still undecided for next year. He is exploring possibilities of continuing his basketball career. Many jucos are interested in Gabe and he continues to way options for college.
#35 Christian Arndt- Christian had a break out season for the Pirates this year. One year removed from being a key role player on the pirates state championship team, Christian Arndt made a name for himself in 2019-2020. Christian Arndt led the state of Kansas in offensive rebounds per game. Christian recorded 19 rebounds in a game twice, 15 or more rebounds in a game 4 times, and collected 12 double doubles on the season. Christian was name 1st team All Frontier league, Sports in Kansas 1st Team All State, Topeka Capital Journal 3rd Team All State, Wichita Eagle Honorable Mention All State, 810 Varsity Honorable Mention All KC Metro, and Basehor Linwood Invitational All Tournament Team. Christian stepped into a new role this year and became a star. I believe his best basketball is still ahead of him. Christian plans to play basketball next year and currently has interest from many jucos and NAIA schools in the area. He is still undecided on where he will attend.
#4 Parker Bryant- As a coach I am as proud of Parker Bryant as I am of any player. Parker struggled a year ago with issues on and off the basketball court. But in 2019-2020 Parker Bryant matured into the type of teammate successful seasons are made of. Parker appeared in 16 games this year and was a fan favorite every time he stepped on the court. He was also a favorite to all his teammates. Parker Bryant gave great effort in practice, helped run scout plays, added depth to the roster, and enthusiastically supported his teammates during games. Teams cannot win without unselfish players like Parker Bryant and we appreciate all his contributions this season. Parker is undecided for next year but also plays baseball and hopes to attend college as a baseball player next year.
Managers:
Jack Robinson- Jack was an integral part of the basketball program for years. He had been the manager for multiple state runs for Piper and was a big help to the coaching staff both in practices and in games. Jack responsibilities included assisting coaches in practice, supports the team in game, and making sure all the essentials were taken care of during the season. Jack was a big help to the program and we wish him well as he continues his education at Ottawa University. 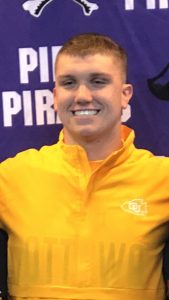 Preston Miller- This was the first year Preston was a manager for us at Piper. Preston handled one of the tougher duties in making sure all games were filmed. During away games this could be a difficult task of holding the iPad and not missing any game action. We were fortunate to have him helping us this year and wish him luck in the future.
Pirates Official Sponsor