With the sudden ending of the basketball season and the spring seasons, we have reached out to the coaches/parents to send in pictures of the 2020 Seniors who seasons got cut too short or all together. This week we are remembering the girls basketball program that was 21-2 and heading to their 2nd straight final 4 at the state tournament…………..

The PHS Girls Basketball team had their season cut short by the cancellation of the State Basketball tournament after the first round.   The first round victory over Baldwin turned out to be the final game in the career of 6 senior girls. 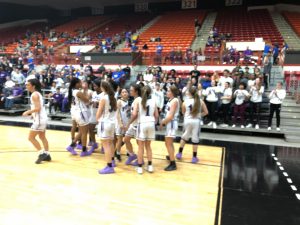 This senior class has been extremely successful.   Over their four year careers the PHS Girls Basketball team won 4 League Titles and 4 Sub-State Titles.   As Freshman in 2017 the Lady Pirates finished 3rd at State and also finished 3rd at State the following year of 2018.   In 2019, as Juniors, the Lady Pirates finished State Runner-Up.  The 2020 season once again finished in the Final Four of the State Tournament.   At the time of the cancellation the Lady Pirates had one 15 consecutive games and had a season record of 21 wins and 2 losses.  Over their four years, the PHS Girls compiled an outstanding record of 90 wins and 6 losses.

Ashley Williams played as the back-up center this year.   Ashley played hard in her limited minutes and was third on the team in blocked shots.  Ashley played in all 23 games this season and was a member of the girls basketball program for four years. 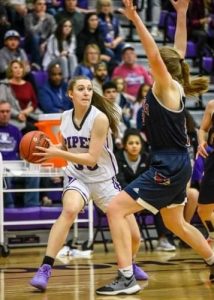 Emma Serrano was a three year letterwinner.   She played a huge role for the Lady Pirates this year as a shooting threat and an excellent defender.  Emma played in all 23 games this season and was a starter 20 times.  Emma made the second most threes for the team this year. 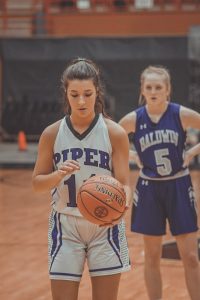 Riley Porter was a three year letter winner.   Riley was given the role of defending the opponents leading scorer on most nights.   Riley was tenacious on both ends of the floor.  Riley was awarded Academic All-State by the KBCA.  Riley started all 23 games this season.   She led by example with her work ethic each and every day.

Ali Vigil had an outstanding career.  She became the 5th member of the 1000 point club in PHS Girls Basketball history earlier this season.  She finished her career with 1033 career points.  Ali was named second team All-State this year and also received All-State honors all four years of her career.   Ali made a school record 140 threes in her career.  Ali is going to continue her basketball career at the University of Central Missouri. 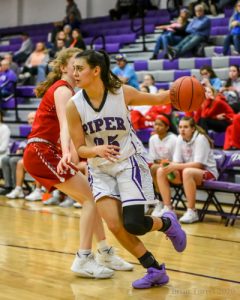 Ayreona Carter was a two-year letterwinner for the Lady Pirates.   She was the inside presence this year on both ends of the floor.   Ayreona led the team in rebounding and blocked shots.  She also averaged 10.5 ppg. this season.  Ayreona was named 2nd team All-Frontier League and also received All-State Honorable mention honors.   Ayreona is planning on playing college basketball, but is undecided where at this time.

Grace Banes saved her best for last.   Grace made 6 threes and had 20 points in her last game of her career.   Grace was named 2nd team All-Frontier League and also received All-State Honorable mention honors.  Grace made a school record 57 threes this year and made 139 career threes.   Grace played in every single game since her freshman year.  Playing in 96 career games is more than any other individual in school history.   Grace was second on the team in scoring this year at 11.9 ppg.  She scored 883 points in her career. 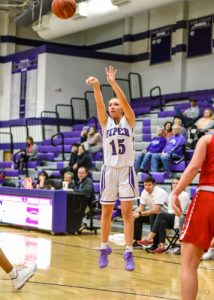 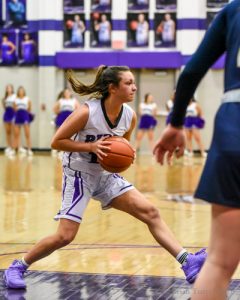 Thank you Seniors for a fun-filled and successful four years!   Best of Luck to you all as you leave PHS.  We will miss you.