The 2020 Piper Women’s Powerlifting Team was the State Runner-Up losing the championship to Tonganoxie High School by only a single point.  This year’s team was determined they would be hoisting a state championship trophy and not a second place plaque. The 26 competitors that represented the Piper Pirates in the Kansas 4A State Powerlifting meet hosted by Fort Scott High School made that a reality.  With 35 total medals including 8 gold medals, 18 silver medals, and 9 bronze medals, the 2021 Piper Women’s Powerlifting Team is the first state championship team in school history.  The Pirates defeated state runner-up El Dorado High School by 39 points.

Sophomore lifters Breanna Miller and Kylie Brockman led the way as the Pirates’ two State Champions in their respective classes.

Kylie Brockman became the first back-to-back state champion female lifter in school history.  Kylie also became only the second lifter in Piper history to earn the prestigious award of Lightweight Female Lifter of the Meet.  The award is given to the lifter with the greatest power index of any lifter in the 140lb class and below.  The power index is calculated by taking the lifter’s total weight lifted and dividing it by their total body weight, yielding what would be considered pound-for-pound strength.  Kylie is now the owner of one silver medal and seven gold medals at the state competition, the most of any lifter in Piper history.

Breanna Miller won her first overall state championship this year, after a freshman campaign that saw her taking home silver in the 180lb class.  The motivated Miller brought home silver medals in the bench press and clean and gold in the squat with a 300lb lift, also a school record.  In just her sophomore year, Breanna has secured five silver medals and three gold medals at the state competition.

Sophomore and newcomer, Sophia Derks, secured state runner-up in the 114lb class.  Sophia took home silver medals in the clean with a 95lb lift and in the bench press with a 90lb lift.

In her first state competition, junior Raven Corlee, secured state runner-up in the women’s 132lb class.  Raven finished 2nd in the clean and 3rd in the squat to teammate and freshman lifter Genevieve Kulas.

Zawadi Kariuki finished 5th in the 140lb class in 2020 during her freshman campaign, with her three lift total being 345lbs.  After an incredible off-season, Zawadi moved up to the 148lb class and increased her three lift total by 165lbs.  That total was good enough to secure the sophomore a bronze medal in the bench press, silver in the clean, gold in the squat, and state runner-up overall.

Kyleigh Owen is the longest tenured senior lifter for the Pirates competing in her third state competition.  Kyleigh’s two previous trips to that state competition yielded a 2019 result of 7th place and a 2020 result of 5th place.  She bested her two previous trips by securing four silver medals; bench, squat, clean, and overall.  The state runner-up is also the school record holder in six different categories.

Junior Mackenzie Jones achieved her first state medals taking home bronze for the Pirates.  Mackenzie set season bests in the bench press and clean, but it was her bronze medal squat that secured her place on the awards stand.

Kaia Cordill competed for her third time as a member of the Piper Powerlifting team.  Her effort resulted in Kaia’s first state competition gold medal in the clean, winning the event with a personal best of 165lbs.  Kaia brought home a bronze medal overall.

Senior lifter, Sara Lake, has already written her name in Piper history as the first female state champion wrestler in school history, in both 2020 and again 2021.  Sara was the state-runner up in 2020 in the 148lb class, and she finished her powerlifting career with a silver medal in the bench press and a third place finish overall. 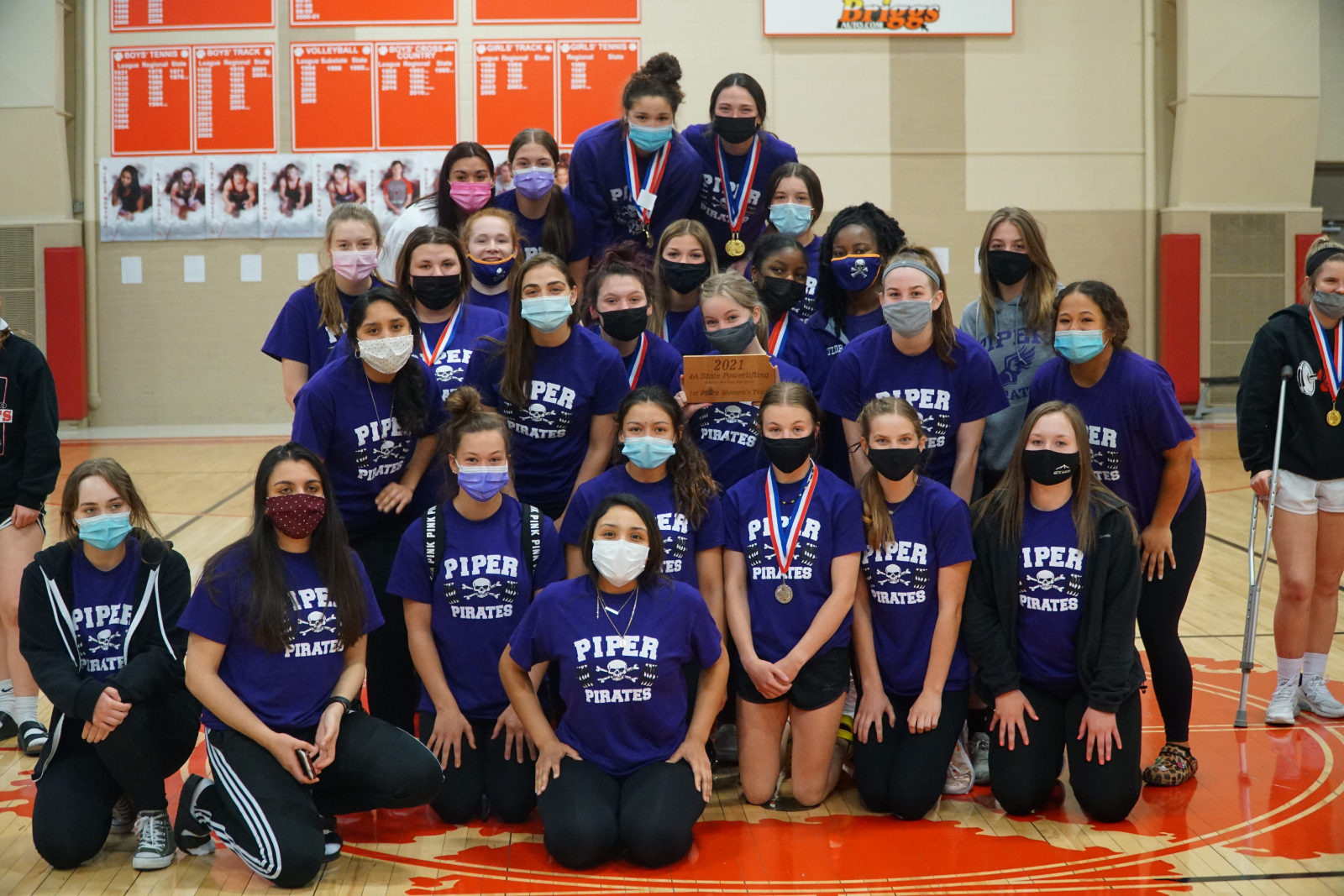 The 2021 Piper Men’s Powerlifting Team competed with 18 lifters in the Kansas 4A State Powerlifting meet hosted by Fort Scott High School.  After the dust settled, the men’s team finished as the 2021 State Runner-Up to Labette County High School.  The day yielded 29 total medals for the Pirates including 9 gold medals, 12 silver medals, and 8 bronze medals.

Jonathon Green finished his junior campaign as the bronze medal winner with a total weight lifted of 845lbs in the 198lb class.  Jonathan also was the silver medal winner in the clean with a 245lb lift.

Junior Jackson Andrade, 140lb Class, was last year’s State Champion in the class.  This season, Jackson improved his total over last year, but it was not enough to see back-to-back championships in total weight lifted as the competition was greatly improved in the class.  Even in the much improved class, Jackson secured his place as the 2021 State Runner-Up.

Senior Brent Hoover made the jump from the 156lb class, where he finished fourth in the 2020 State Championship, to the 173lb class.  Brent improved his total weight lifted by 90lbs from last year, and that resulted in a silver medal and a State Runner-Up finish as he wraps up his career as a Piper Pirate.

Junior AJ McDaniel finished his year as the 242lb Men’s State Champion.  The day would see AJ taking 3rd place in the squat with a 335lb lift, 2nd place with a 225lb clean, and a gold medal bench press lift of 280lbs.  It was AJ’s bench press that sealed the deal as he bested the 2nd place finisher by 45lb in the lift.

Senior Anthony Ferguson becomes the second men’s lifter in Piper history to earn the prestigious award of Heavyweight Male Lifter of the Meet.  The award is given to the lifter with the greatest power index of any lifter above the 165lb class.  The power index is calculated by taking the lifter’s total weight lifted and dividing it by their total body weight, yielding what would be considered pound-for-pound strength.  Ferguson was also the 173lb Champion securing gold over Piper teammate Brent Hoover.

Tony Cobbs finished his career at Piper as the most decorated lifter in school history.  Tony followed up his 2020 State Championship in the Men’s 242lb class as the 2021 State Champion in the Men’s PWT division.  Tony’s career has resulted in 2 bronze medals, 1 silver medal, and 6 gold medals during his lifting career at four state powerlifting championships.  It was Tony’s final lift as a Piper Pirate that will ensure his place in state history when he tied the 4A Kansas State Powerlifting squat record with a 565lb squat.

The Pirates will graduate five seniors; John Brungardt, Tony Cobbs, Anthony Ferguson, Brent Hoover, and Darius McNeal.  The group helped to lead this year’s team to a 2021 State Runner-Up, but also were instrumental in the program’s 2020 State Championship.  Amongst the group, they have held 28 school records throughout their careers. 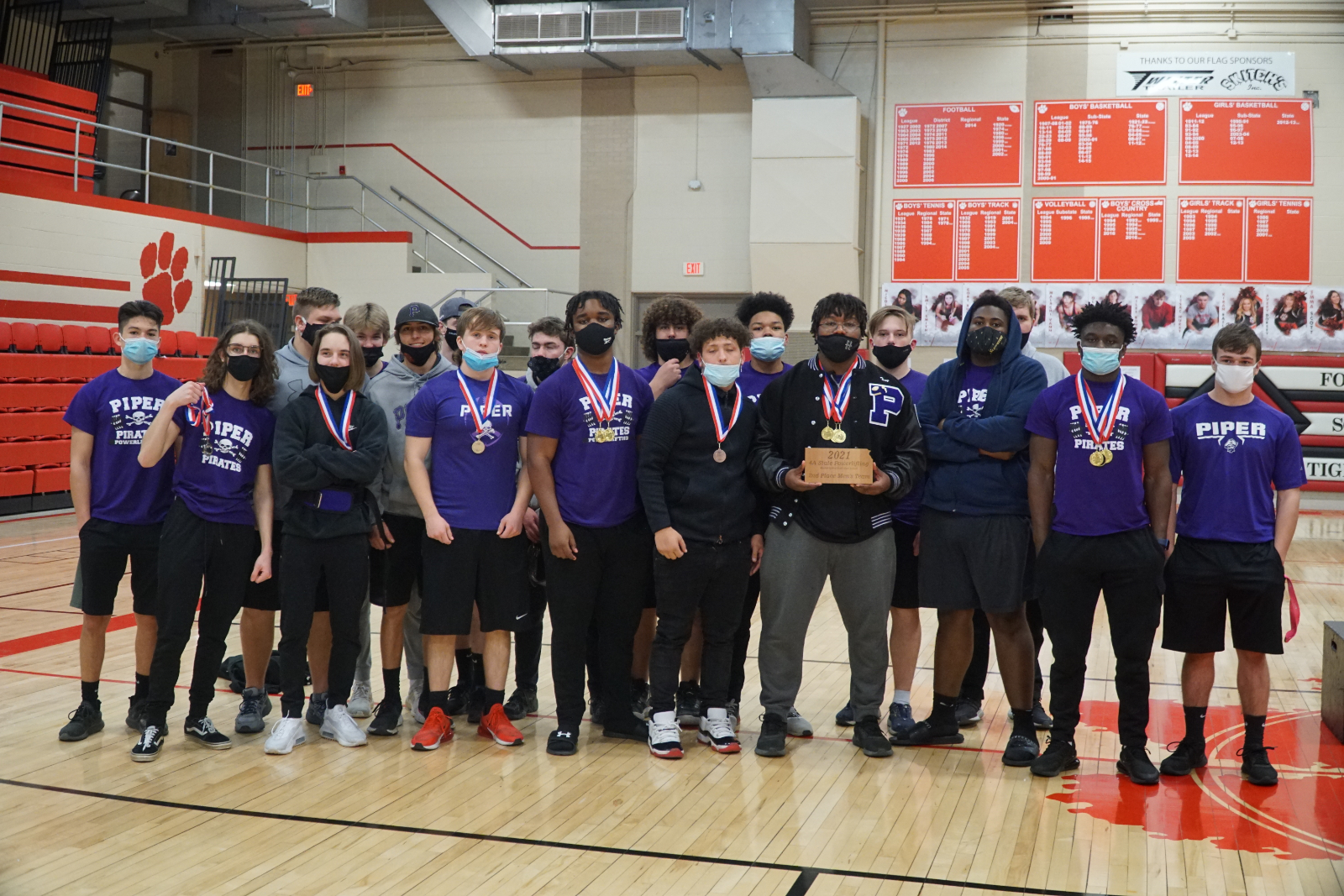